Happy Thursday! The days are passing quickly until Santa comes, and I am sooooo excited! woo woo woo! 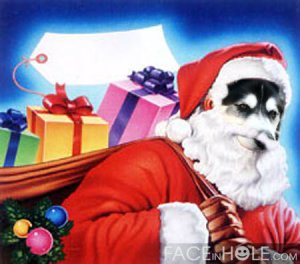 Today we have two letters. The first comes to us from the gang at DogDaz, who by the way won the prize contest from the ASPCA!

We think we have been very good doggies and kitties this year, so could you bring us the following presents for the winter holiday:

– Noel wants every lost animal to find it’s way home
– Louise wants people to stop hurting animals (and humans too) and could you find them extra special loving homes.  (Louise was hurt and you brought her here, so she knows you can do it.)
– The Muffin Man wants everyone to get along.
– Sofie Bear wants every animal to have enough to eat (and maybe she can help them eat it.)
– Miss Constance Kitty wants to be an only cat (do you have a cat in the North Pole?  Is it nice and quiet there?).
– Nine wants an erector set, and one of those climbing trees, and a whole bunch of cat nip toys, and …., and …..
– Stella wants to play with whatever Nine gets (but she really would like a diamond studded collar.)

and the DogDaz human wants people to shop local and remember that your charity makes a very big difference.

Thanks Santa Paws – We do believe – The DogDaz Zoo

I believe too! I believe that you should all get what you want, especially Nine!

Next up is our friend Misaki from The Misadventures of Misaki! She’s a Malamute like SantaDog! woo woo!

Misaki from the Misadventures of Misaki

Despite a gang of evil birds who are determined to stain my character with wild accusations, I have been a pretty good pup this year – I hope you agree!

Obviously lots of treats and toys in my stocking would be good, but what I’m really wishing for is snow!! I hope you’ll be able to send some in my direction.

Also, if you have any miracle-grow for fur that would be useful, my poor shaved belly is starting to feel the cold!

I’ll definitely be leaving out some cookies and a glass of sherry for you on Christmas eve, along with some treats for your sleigh team (we all know the reindeer thing is a myth so I’ll dispense with the carrots, unless like me, your mallies and sibes like them

It’s TRUE! Santa really DOES use sled dogs instead of reindeer! But those deer have a contract and well……

I'm Jen, caregiver to the late, great Rumpydog and now to some rather pesky kitties. You can follow us on Twitter - @FineMellowFella and @HissyFitJones. And don't forget to LIKE our Facebook pages! Thanks!
View all posts by Rumpy's Kitty Siblings »
« Wordless Wednesday- Miscellaneous Holiday Stuff!
Finally Friday! »