We take it for granted these days that when disaster strikes, there will be trained animal rescue volunteers on the ground helping to rescue and care for the displaced animals. But what does it take to launch such a major effort?

Today I’m talking with Emily Schneider, Senior Manager for Media and Communications with the ASPCA. She’s here to shed some light on what such an undertaking involves.

Do you know how much effort goes into helping animals after disaster strikes?? (ASPCA photo)

Rumpy: Thanks so much for being my guest Emily. Let’s start at the beginning. How does the ASPCA become involved with a response effort?

Emily: The ASPCA Field Investigations and Response team assists animal victims of both natural and man-made disasters throughout the country. The team is made up of investigators, veterinary and animal handling experts. The team has been called in to assist in the event of natural disasters, but is more commonly called upon by state and municipal governments and other animal welfare partners to lend expertise during large-scale animal rescues. 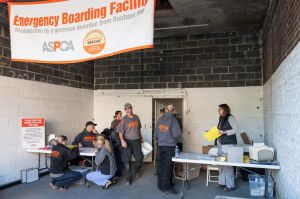 Rumpy: Wow! And how do you get involved in these rescue efforts?

Emily: The ASPCA is typically contacted by the local agency for assistance and we then deploy responders to assist with animal rescue and relief efforts.

Rumpy: So you don’t just decide to go in without being called. How long after you get the call do you expect to be involved in a rescue effort?

Emily: We really don’t have an average; the length of each response operation varies as it is determined by the community and its needs. For example, we were in Joplin, Mo., for 45 days following the EF-5 tornado that decimated a third of the community.

Look at all the food that’s needed! (ASPCA photo)

Rumpy: I remember! What services did you provide there?

Emily: We assisted with field rescue, reunion efforts, emergency sheltering for lost pets, and eventually finding new homes for orphaned animals that were not reclaimed by their owners. 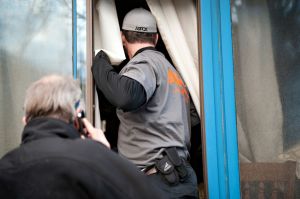 Heading inside to rescue (ASPCA photo)

Rumpy: That sure is a lot of work!

Emily: We have currently been on the ground for more than six weeks planning ahead of Hurricane Sandy, and now focusing on the emergency boarding facility that we established a week ago to assist pet owners and temporarily shelter their pets until they can get back on their feet.

Rumpy: I can only imagine how much planning has to go into such efforts!

Tomorrow, Emily and I will talk about what it takes to make these rescue efforts happen!

NOTE: All photos posted today were taken by staff of the ASPCA and were used with permission.

Rumpy has gone on from this plane. We, his kitty siblings,continue to blog about animal welfare- and other things- at rumpydog.com in his stead. You can follow us on Twitter - @RumpyDog. And don't forget to LIKE our Facebook page! Thanks!
View all posts by Rumpy's Kitty Siblings »
« Introducing Jasper the Maremma!
The ASPCA- Helping Animals in Many Ways! »

There was an error retrieving images from Instagram. An attempt will be remade in a few minutes.