MEOW! My name is June Buggie, and I have something to say.

I get emails from a variety of organizations dedicated to helping animals. One that recently struck my eye was an email I received from Big Cat Rescue in Tampa, FL.

Now let me just say that I believe sanctuaries, and for that matter, ALL animal rescues, are a necessary evil. If you humans weren’t irresponsible in the first place, none of these places would be required. Therefore, only groups that are also working to eliminate the need for sanctuaries are, in my opinion, truly helping the cause of animals.

I am also skeptical of any group until I’ve learned more about how it operates, because, to be blunt, there are many groups out there calling themselves sanctuaries and rescues that are anything but.

So why was I attracted to this particular email by Big Cat Rescue? Because the first story was about a serval named Nala that was surrendered to them from Nashville, TN. I used to live just outside of Nashville, ya know. Who keeps a serval as a pet? Apparently lots of folks. 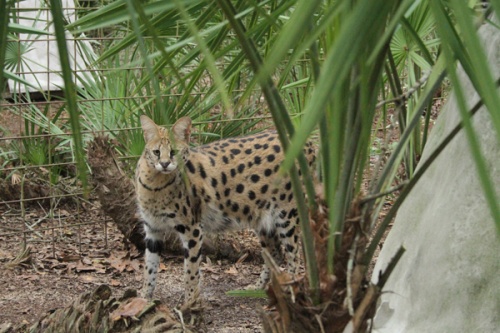 But it was what I read next that made this Little Kitty purr. Big Cat Rescue said that in order to accept the serval into their sanctuary, the owner had to give up their Exotic Animal permit and sign a legal agreement to never again own an exotic cat as a pet. The group does this because they don’t want people to surrender an older animal they have grown tired of only to acquire another baby. Big Cat will impose hefty fines if the agreement is violated, so they’re not playing around.

Is that not fantastic?

It was for Nala. The original owner of Nala died, and his son signed the agreements and surrendered her to Big Cat. Before coming into the care of Big Cat Rescue, she was kept indoors as a pet and had, most likely, never been outdoors. But she is now, as she was meant to be.

Thanks Big Cat Rescue for doing your part to stop the exotic animal trade in the US.

Here’s a video from Big Cat Rescue that talks about the rescue and about Nala.

I'm Jen, caregiver to the late, great Rumpydog and now to some rather pesky kitties. You can follow us on Twitter - @FineMellowFella and @HissyFitJones. And don't forget to LIKE our Facebook pages! Thanks!
View all posts by Rumpy's Kitty Siblings »
« Thank DOG it’s Friday!
The Animal Welfare Blogger Challenge! »