And we’re back with another edition of Hisses and Purrs! This week, Hissy Fit Jones didn’t have to go far to find lots of reasons to be upset. Hissy, take it away!

Some humans need an attitude adjustment, and I’m just the kitty to give it!

Hisses to the country of Romania. Since an August mauling death of a 4-year-old by a street dog, the media has whipped up a frenzy against animals, and the cruel attacks on animals has skyrocketed. The lack of will on the part of the government to address the problem combined with a lack of fear of law enforcement retribution also plays into this horror.

Hisses to the 40-year-old Osaka, Japan, man, who was found to have over 80 reptiles in his one room flat. The man said he kept them as pets. Some were seized because the man didn’t have the appropriate permits for them. People, if you insist on keeping an animal as a pet, at the very least you should give the animal some space. How much room do you think each of those 80 reptiles get in a 107 square foot room?

Who’s the latest rich, spoiled brat to find himself publicly shamed for posing for photos with his big game kills? Why, Kiwi millionaire Mark Gunton. It seems there are photos of him posing with at least 3 dead elephants he claims to have killed, and a Nile Croc. These are the hunters that make my blood boil. Your ilk kills these majestic creatures for no reason other than to brag that you’ve done so. Shameful! Hisses upon hisses to you…. and a piss on your shoes as well. And purrs to those who are calling you out for your actions.

Oh, hisses to Judy and Ken Gingrich of New Holland, Pennsylvania. This year, like every other year, the couple open their big game trophy room to the public during the holiday season. Because, after all, nothing conveys the warmth of the season like the senseless killing of animals, and what’s the point of killing them if you can’t brag about it too?

Oh oh! I better stay away from him for awhile! June Buggie, is there any good news out there? 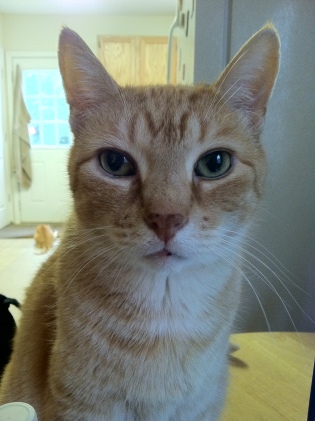 Purrs to Swedish fashion companies Lindex, Gina Tricot, MQ and H&M, for agreeing to no longer manufacture Angora hair clothing after a video was released showing how the hair was obtained. The live rabbits are tied down and scream while clumps of hair are pulled from their bodies. And purrs to each of you that choose to not wear Angora because you won’t support animal cruelty either.

Purrs to the UK for ending the senseless badger cull in Gloucester, though the reason is sickening. Seems they couldn’t find enough badgers to kill. You mean you garnered all that negative publicity and ill will, and now you can’t even say that your murderous rampage was ineffective? Perhaps now they’ll look for an effective and humane way to reduce the transmission of tuberculosis to cattle.

Purrs to the World Trade Organization for upholding the European Union’s ban on Canadian seal products for moral reasons. While there is another level of appeal, I think the writing is on the wall for the Canadian commercial seal industry. Maybe now they’ll see that at least some governments take the horrific killing of baby seals seriously.

And purrs to the couple who run the Sleepy Hollow Dog Rescue in Florida we told you about yesterday. Seems that while initially they refused to allow inspectors to enter, the property owners have since had a change of heart and are allowing them in. A total of 70 animals were found on the property. All but 5 personal pets will be surrendered to authorities. None of the animals appeared malnourished.

Thanks Buggie. I do feel better now.

Do YOU have any hisses or purrs to share this week?

I'm Jen, caregiver to the late, great Rumpydog and now to some rather pesky kitties. You can follow us on Twitter - @FineMellowFella and @HissyFitJones. And don't forget to LIKE our Facebook pages! Thanks!
View all posts by Rumpy's Kitty Siblings »
« Two Animal Groups in the News
A Former Feral’s Letter to Santa »

17 thoughts on “Swedish Fashion: Saying No to Angora Hair!”