So Hawaii Wants to Kill Cats…..

Have you heard of the study conducted by Cheryl A. Lohr & Christopher A. Lepczyk of the University of Hawaii where they asked Hawaiian residents what to do about unowned cats? It was published this past April in Conservation Biology.

Well, let me fill you in. Seems Lohr and Lepczyk have determined that, at least according to rural residents and conservationists, the best way to deal with the problem of unowned cats is to trap ’em and kill ’em. They also found that TNR (trap-neuter-release) was the LEAST preferred technique.

Needless to say, there is a LOT of controversy surrounding this study. Vox Felina published a response to the study just this month citing numerous flaws in the way the study was conducted. 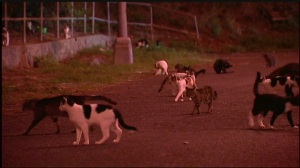 But what is NOT in dispute is the fact that the numbers of unowned cats on the Hawaiian islands are far too high and they are killing endangered birds at an alarming rate.

Hawaii has a HUGE problem with feral cat overpopulation. The climate allows for breeding throughout the year. The cats have no natural predators. And, despite laws against it, people continue to dump animals or allow unaltered cats to roam outdoors. Then there are people feeding the feral cats, but not managing colonies, which allows for more births. Add all that up, and it can equal nothing but disaster for birds and small animals.

Personally, I think we’re focused on the wrong culprit. The REAL problem is with humans. Oahu has a population of approximately 1 million people, and 60% of households on the island have a pet. Over a quarter of those households obtained that pet from a breeder. And, apparently, pets are just as disposable in Oahu as in the rest of the US. Last year alone, the Hawaiian Humane Society of Oahu handled almost 28,000 animals. 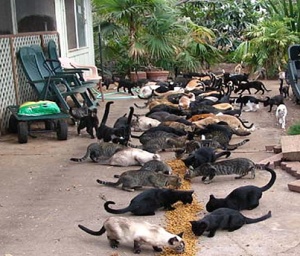 Hawaii has worked hard to deal with the unowned cat problem for years. Since 2005, Hawaiian Humane Society of Oahu alone has sterilized 19,000 feral cats. And there are other groups there doing the same. And yet, the problem continues to get worse. Clearly, TNR isn’t working.

When taking in the full view of the problem facing Hawaii, I can see how many residents would feel it’s time to get rid of the cats.

Until we find a way to address the problem with humans acting irresponsibly, Hawaiians are going to have to decide which is more palatable: kill cats, or watch numerous bird species go extinct.

So, what do you think might work for Hawaii? And, I’m warning you, I’m going to play Devil’s Advocate with your plans, so think it through.

I'm Jen, caregiver to the late, great Rumpydog and now to some rather pesky kitties. You can follow us on Twitter - @FineMellowFella and @HissyFitJones. And don't forget to LIKE our Facebook pages! Thanks!
View all posts by Rumpy's Kitty Siblings »
« The Rewards of a Difficult Job
So Hawaii Wants to Kill Cats….. »