The End of the African Elephant

In 20 years, most of us will still be alive.

Which means most of us will be around to witness the extinction of the African elephant. 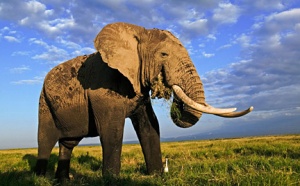 Killing of elephants for their tusks has reached unsustainable levels. Humans now kill more elephants than are born each year.

George Wittemyera, Joseph M. Northrup, Julian Blanc, Iain Douglas-Hamilton, Patrick Omond, and Kenneth P. Burnham conducted a study and presented their findings to the National Academy of Sciences of the United States. They extrapolated that in 2011 alone, 40,000 elephants were murdered for their tusks.

They cite an increased demand for ivory in places, including China. A pair of tusks can fetch up to $10,000 American. That’s enticing money for some folks.

Now before you Americans start pointing fingers, there’s plenty of ivory trade here in the US as well. There are loopholes in the law preventing the import of ivory. Call yourself a hunter and the tusks a trophy, and you’re set. The Obama administration has tried to tighten that loophole, but the NRA is fighting it. And there’s lots of smuggling as well. Few smugglers are caught, and the ones that are usually get a slap on the wrist.

Fortunately, there is interest in saving the elephants and rhinos. Countries have banded together to stop the flow of ivory through their country. We’ve all heard of governments destroying piles of confiscated ivory. And some countries have stepped up enforcement of boundaries to preserves.

But it’s not enough.

Which means that soon we will see the largest land animal go by the wayside.

I'm Jen, caregiver to the late, great Rumpydog and now to some rather pesky kitties. You can follow us on Twitter - @FineMellowFella and @HissyFitJones. And don't forget to LIKE our Facebook pages! Thanks!
View all posts by Rumpy's Kitty Siblings »
« It’s Time for This Year’s Tacky Holiday Gifts Guide!
The Perpetual Holiday Dilemma: What to Eat? »

38 thoughts on “The End of the African Elephant”