Recently the New Jersey state legislature passed a law banning the use of gestation crates on the state’s 300 pig farms. The bill passed 53-13 in the state Assembly, and 32-1 in the state Senate. Polls suggested that 93% of the state’s population supported the bill. 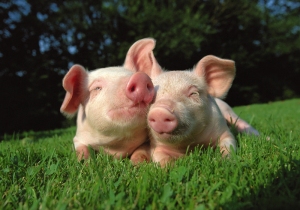 But the bill is not law, because Governor Chris Christie vetoed it.

He said he did so because the bill was a non-issue. New Jersey only has about 9000 pigs in the state, and most pig farmers have already done away with those contraptions of torture.

Iowa, on the other hand, has over 20 million pigs in that state. It’s the largest pork producer in the US, and is home of the National Pork Producers Council. Senator-elect Joni Ernst, during her campaign, touted her skills at castrating hogs.

Iowa is also the home to the first presidential primary.

And, what a coincidence, Christie is running for president.

To be sure, Christie has made no bones about how much he loves Iowa. He’s all but kissed Iowa Governor Terry Branstad’s ass. And Branstad quickly let it be known how pleased he was that Christie vetoed the bill. 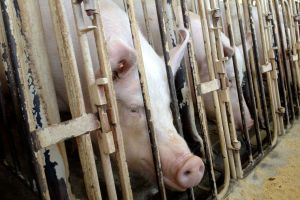 This is what’s it’s like for pregnant sows forced into gestation crates. They cannot turn around or lie down comfortably (Photo: HSUS.org)

Christie blames the Democratic legislature for setting him up to look bad before the presidential primaries began.

Maybe they did. But they also showed me that this guy is more concerned about getting what he wants than in representing the will of the people who have elected him now. I’m guessing the Pork Council made a sizable contribution to his campaign coffers before the ink was dry.

And THAT, people, is why you and I have to be politically vigilant on behalf of animals.

Rumpy has gone on from this plane. We, his kitty siblings,continue to blog about animal welfare- and other things- at rumpydog.com in his stead. You can follow us on Twitter - @RumpyDog. And don't forget to LIKE our Facebook page! Thanks!
View all posts by Rumpy's Kitty Siblings »
« On Shopping for a New Vet
#ThrowbackThursday: Lost Treasures »

There was an error retrieving images from Instagram. An attempt will be remade in a few minutes.