Memorial Day: How and Why We Remember

Monday is Memorial Day in the United States. It’s a holiday that signifies for many of us the beginning of summer. Schools are either already out or are soon to be for the summer break. Workers are planning their summer vacations.

The weekend is marked with sales, especially at home improvement outlets, as this weekend is designated as a time to clean up your yard and get it ready for summer.

Memorial Day was declared a federal holiday in 1966 to remember those who died in the armed forces while serving their country. But folks had been celebrating a hundred years before the day was actually declared a holiday. Here in the South we call it Decoration Day, a day set aside to clean up the cemeteries  where the war dead were buried, as many of them were buried far from home in graves identified only as Unknown Soldier.

The person who gets the credit for creating the holiday is druggist Henry Welles of Waterloo, New York. Welles is to have suggested that it would be a good idea to honor those who died in the Civil War to General John Murray, a war hero, and on May 5, 1866, the town of Waterloo did just that.

This is Henry C. Welles, the man credited with founding Memorial Day in the US.

Of course, like many good ideas, this one was credited to a white man, when, in fact, it was African Americans that celebrated the first Decoration Day.

On May 1, 1865, former slaves gathered in Charleston, South Carolina, at what was a war prison. They reburied Union Soldiers in a proper cemetery they built and called Martyrs of the Race Course, then held a ceremony to honor the dead. (this info came from snopes.com)

In fact, while we’re grilling and shopping and planting flowers, we’ll hardly remember our war dead at all. 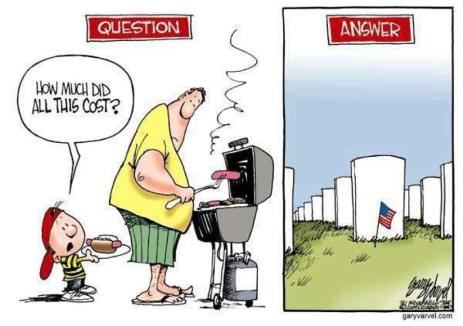 by political cartoonist Gary Varvel of the Indy Star

Rumpy has gone on from this plane. We, his kitty siblings,continue to blog about animal welfare- and other things- at rumpydog.com in his stead. You can follow us on Twitter - @RumpyDog. And don't forget to LIKE our Facebook page! Thanks!
View all posts by Rumpy's Kitty Siblings »
« My Dog is an Angel
Want to Get Rich Blogging? Don’t Read This Post! »

15 thoughts on “Memorial Day: How and Why We Remember”