//
you're reading...
politics of animal welfare

Calling out a Killer of a Much-Loved Lion

We now know that the hunter who lured Cecil the lion away from Zimbabwe’s Hwange National Park using a dead animal tied to a vehicle, put a spotlight on him, shot him with a cross-bow, tracked the injured Cecil for 40 hours, then shot him with a rifle, skinned him, and cut of his head, is none other than Minnesota dentist Walter James Palmer. Palmer and his guides learned Cecil had a tracking device on after he was shot and tried to destroy it. 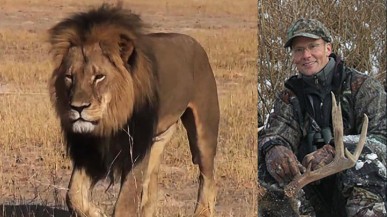 Cecil, RIP, a beloved lion who was wearing a tracking device as a part of WildCRU’s study, and the man who murdered him (when you read the description of the incident, you can’t call it anything else). PHOTO: CNN.com

We also learned Palmer is a serial killer and takes great pride in paying the big bucks to kill animals, and that he’s not above breaking the law to take a life. He paid $50,000 to kill Cecil, and has previously been sentenced to a year probation for lying about where he killed a black bear in Wisconsin.

Palmer’s response? “…I deeply regret that my pursuit of an activity I love and practice responsibly and legally resulted in the taking of this lion.” (The Telegraph)

As much as the knowledge of Cecil’s murder pissed me off, it was that one sentence that pissed me off the most. He’s not sorry he killed Cecil; he’s sorry he got caught. Who the hell pays that much money to kill something? What kind of douchebag can this guy be?

Just think, Minneapolis, you helped fund the murder of a lion in Zimbabwe simply by going to the dentist!

Well, for one, he’s also a sexist pig. Seems he settled out of court when a former receptionist sued him for sexual harassment.

And, sadly, this guy procreated.

So did Cecil, but now that Cecil is not around to protect his pride, other males will move in and will likely kill his cubs in a bid to take over. We humans, however, are more civilized, and will watch this dentist put up a GoFundMe site and raise large amounts of money from others of his kind to pay for possible legal expenses. And according to the Zimbabweans, there may be. They’ve said to the media they want to talk to this guy.

It troubles me to think that the only means we have at our disposal to deal with this kind of brutal, murderous behavior is to call it out on social media. But at least there are enough of us willing to do just that. Palmer is so scared his practice has closed, the web site taken down, and Palmer is in hiding.

Hmmmmmm….. think we could lure him out with a dead animal tied to his car?

I'm Jen, caregiver to the late, great Rumpydog and now to some rather pesky kitties. You can follow us on Twitter - @FineMellowFella and @HissyFitJones. And don't forget to LIKE our Facebook pages! Thanks!
View all posts by Rumpy's Kitty Siblings »
« People Let Me Tell You About My Best Friend
Her Name was Kristen »