Her Name Was Nola. She Was a Showgirl.

The world is mourning the death of Nola, the beloved Northern White Rhino of the San Deigo Zoo Safari Park. She was 41. 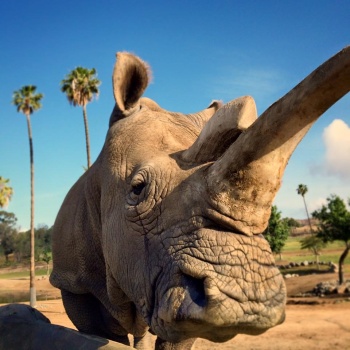 Nola was around 18 months old when she was captured in the wild and taken to the Dvůr Králové Zoo in The Czech Republic. In 1989 Nola was again moved, this time to the San Diego Zoo where she lived out her days.

Nola was considered elderly and after her condition deteriorated, she was euthanized.

Since Nola’s death, there are only 3 known living Northern White Rhinos; those three reside under armed guard in Kenya’s Ol Pejeta Conservancy. The last 4 known northern white rhinos living in the wild were killed by poachers in 2005,  and the species is now effectively extinct. 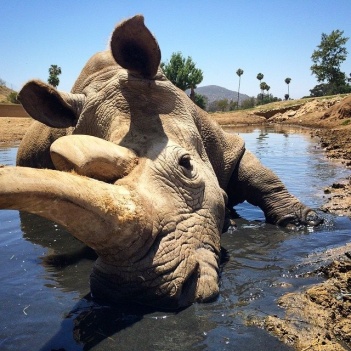 In typical human fashion, we called ourselves acting “humanely” when we captured Nola in the wild to save the species, moved her to Europe, then later moved her again, this time to San Diego where we doped her with hormones to encourage her to get pregnant, though she never did. And because we loved her so much, she was forever on display for our amusement.

Rest in peace, Nola. You’ve earned it, and in death you are finally set free from our constant meddling.

I'm Jen, caregiver to the late, great Rumpydog and now to some rather pesky kitties. You can follow us on Twitter - @FineMellowFella and @HissyFitJones. And don't forget to LIKE our Facebook pages! Thanks!
View all posts by Rumpy's Kitty Siblings »
« I’ve Got a Friend in Me
The Importance of Using the Right Language »

13 thoughts on “Her Name Was Nola. She Was a Showgirl.”