So Ya Wanna Help Those in South Texas…

So ya wanna help those in south Texas. Good! They need your help now and will continue to need it for weeks and months to come.

Photos from a Houston nursing home taken by Judy Lampson.

The sad reality, though, is that while your pockets are deep today, you’ll soon move on to the disaster du jour and Texas will be forgotten, not unlike the victims of Katrina or Sandy were quickly removed from our minds. So while you are motivated, give, give some more, and do it now.

But who do I give to, and what do I give?

The what part is easy: give money. Don’t send your used underwear or unwanted cans of beets to Texas. That doesn’t help at all. I mean, nothing says to a person who has lost everything that you don’t give a shit more than to be offered your stained clothes and food you don’t want. Yes, furniture will be needed, but not today. Today people need to be kept alive. That means shelter. Food. Medications. Care for beloved pets and for livestock. That takes money, and while you’re motivated to give today, Big Pharma and other corporations will wait until they get a PR campaign together before they give a dime.  I STAND CORRECTED: This morning I heard Walgreens, Walmart and other corporations are donating items to the flood area. Good.

If you want to get rid of your used underwear, pack it up and donate it to Goodwill. And if they won’t take it, then it’s time to throw it away. Send Texas money.

Now the hard part: who do I send my money to?

First, who do you NOT send it to?

Don’t send to the small so-called rescue that is known only on social media and is promoted by “friends” that you really don’t know and always seem to be asking for money for somebody. Here’s a dirty little secret nobody likes to mention: scammers run in groups. And during a disaster, there are scammers everywhere. Stick to the tried-and-trued agencies with a good reputation.

Slate magazine posted this article for some ways you can help not only animals, but the homeless, persons with disabilities and those with young children. However, some of the charities they list seem to have little information about their financial accountability online. 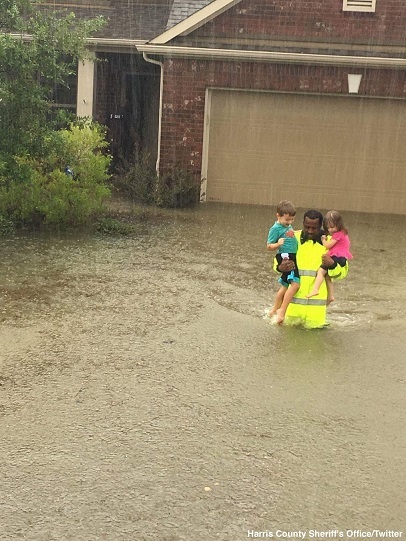 When I check out a US non-profit, I use either Charity Navigator or GuideStar. At these websites you can find information about a variety of nonprofit charities. For example, the SPCA of Texas has a 4-star rating, with 80% of money going to programs and services, 9% going to administrative expenses and 10% spent fundraising. They’re overseen by an independent board of directors and are regularly audited.  GuideStar lists them as a platinum charity.

The Coastal Bend Disaster Recovery Group listed in the Slate article has no information posted at either site. Doesn’t mean they’re not reputable, but it does mean I can’t check them out, and I’d rather give to those with a traceable reputation.

As for the American Red Cross, they have taken a beating by the media for the past few years, but the fact remains they do have boots on the ground helping not only those who have lost all, but also those who are out there saving lives. And their ratings are excellent. You can give money and donate blood too.

So give money until it hurts and give it today, but do your homework and give to an agency that’s actually going to help those in need.

I'm Jen, caregiver to the late, great Rumpydog and now to some rather pesky kitties. You can follow us on Twitter - @FineMellowFella and @HissyFitJones. And don't forget to LIKE our Facebook pages! Thanks!
View all posts by Rumpy's Kitty Siblings »
« Oh My Gravy! is ‘People Food for Cats’
Another Vet Visit for Bubba »

32 thoughts on “So Ya Wanna Help Those in South Texas…”