On the Death of Harambe

Harambe was a 17 year old Western Lowland Gorilla kept at the Cincinnati Zoo. OK, he was a prisoner at the zoo. I don’t care how nice the enclosure, I doubt, if given the choice to remain there or be free, he’d choose to stay. 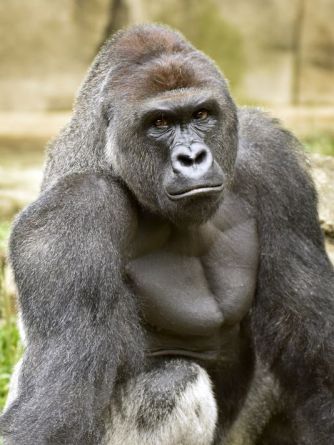 So a 4 year old kid decides he wants to play in the gorilla area and tells his mother what he’s going to do,then looks for a way to get in. He falls 10 feet, landing in a moat, then comes face to face with Harambe. At first Harambe seemed calm, but the people who saw the event began screaming and yelling, because humans do stupid stuff like that, and in the process they agitated Harambe. The gorilla then grabbed the child and drug him away. Zoo staff called the gorillas out of the enclosure; all responded but Harambe. The decision was made to shoot the gorilla to save the child’s life because a bullet is immediate and tranquilizers don’t work immediately, especially with an excited gorilla. The child was treated at a local hospital and released. His parents, based on the statement they released, are still clueless twits.

Now animal rights activists are calling for the kid’s parents to be held accountable for the gorilla’s death.

But who is responsible for this tragedy?

We are a species who sees ourselves as superior to all other species. Truly, the zoo has no other choice than to act on behalf of a human over a gorilla.

We want to go to zoos and see animals on display. Really? How is that even a thing? We want to get up close to them. We want to touch them. Hold them. Pet them. Because we think as a superior species we deserve that. Our richer folk donate money to places like this because it makes them feel good to help the animals, only they aren’t helping animals at all. They’re helping feed our delusions about animals.

We pay to pet baby tigers without once thinking of what the experience means for the baby tiger (removed from mom, constant stress, then the rest of its life spent in a small cage…. if there is an adulthood).

We flock to Sea World and the circus because it’s cool to see animals perform for us. Doesn’t matter those animals are beaten or harmed in a myriad of ways to get them to act the way we think they should.

And because we have “rights,” we allow people to keep animals in cages or on chains because we own them and can do that to our property if we want to. Animals don’t have rights.

That kid did what 4-year-old kids do. His parents should have kept a closer eye on him, to be sure. And the zoo should have had a more impenetrable enclosure.

Or maybe we should stop seeing animals as lesser creatures who can be treated any damn way we please. After all, the only way animals will survive is if we change the way we see and think about them.

I don’t care how cute the logo, it’s still just a prison for animals.

I'm Jen, caregiver to the late, great Rumpydog and now to some rather pesky kitties. You can follow us on Twitter - @FineMellowFella and @HissyFitJones. And don't forget to LIKE our Facebook pages! Thanks!
View all posts by Rumpy's Kitty Siblings »
« On Moving a Multi-Pet Family
Update on June Buggie »

32 thoughts on “On the Death of Harambe”