It’s All Her Fault!

While shopping Thursday I heard a store clerk tell a customer that Elizabeth Thomas, the 15-year-old TN girl abducted by school teacher Tad Cummins, was found with Cummins in a cabin in northern California. Then the clerk commented that of course Elizabeth went willingly. 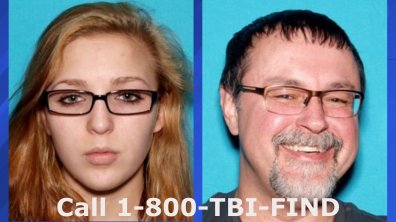 This child who has been repeatedly victimized throughout her life is being blamed for having left with a 50 year old man.

I am flabbergasted that so many people see nothing wrong here. They say things like she went willingly, or she was in love.

What if I told you that last year Elizabeth’s mother was charged with abusing Elizabeth and her siblings? It’s true, and the kids were removed and placed with their father. Elizabeth was home-schooled while in her mother’s care so she didn’t have a lot of contact with the outside world. Now she was attending public school. Add all that to the chaos of puberty and even the most heartless bastard would have to admit this kid was vulnerable.

Tad Cummins saw she was ripe for the picking.

He groomed her. He took her to church. He treated her differently than the other students. He allowed her to come to his classroom at any time to talk. He listened and pretended to care.

Screenshot taken from Walmart surveillance video. See, she didn’t leave, so she must have wanted to be there (insert eye roll here).

All the while Cummins searched online for places where he could marry a teenage girl. After placed on leave when it was learned he was having contact with the child despite being told not to, he took out a quick loan of $4000, obtained 2 refills of Cialis, took his wife’s vehicle (leaving her his manual transmission jeep that she could not drive) and convinced Elizabeth to leave with him.

It seems law enforcement didn’t take the case seriously either, because it was only after Elizabeth’s father had his attorney petition the court for permission to depose witnesses in the case that law enforcement began to share more information with the public.

And some in the media had to describe her demeanor when found. She didn’t SEEM to be forced to be there.

Many people decided Elizabeth went willingly, so what’s the big deal? Or worse, they painted the child as seductress that led her godly teacher astray.

Elizabeth isn’t the only female to have been vilified this week.

Last Sunday Steve Stephens walked up to Robert Godwin Sr. and told him to say Joy Lane. He then shot and killed Mr. Godwin. Stephens videotaped the murder and posted it to Facebook. Three days later he committed suicide after he was spotted by police.

Even though Ms. Lane had nothing to do with the murder, she has become the target of internet cruelty. People have commented that she should have been killed instead of Mr. Godwin. Comments have been made about her looks. Her body size. Some have even made death threats against Ms. Lane.

Stephens was reportedly cruel to animals. He had a gambling addiction. Ranted about Ms. Lane not calling him. Blamed a cold-blooded murder on her. But was it Ms. Lane’s fault he killed Mr. Godwin? Uh….. no.

It was learned this week that Utah judge Thomas Low said of a man who had just been convicted of molesting and raping two young women, “The court has no doubt that Mr. Vallejo is an extraordinarily good man…. But great men sometimes do bad things.” Judge Low then allowed the convicted man to walk out of the courtroom a free man while awaiting sentencing.

And in Memphis, defense attorney Steve Farese Sr. told a jury of 9 women and 3 men that his wealthy client, businessman Mark Giannini, was not guilty of rape and that the victim was lying. Said Farese, “Women can be especially good at it (lying) because they’re the weaker sex and we … and we want to protect them and not have anybody take advantage of them, at least I do.”

Doesn’t look like he gives a shit about protecting women from where I sit.

So what’s the moral of my angry rant? That no matter how cruel a man’s behavior, it will always somehow be a woman’s fault.

Even if that woman is really a 15-year-old girl.

I'm Jen, caregiver to the late, great Rumpydog and now to some rather pesky kitties. You can follow us on Twitter - @FineMellowFella and @HissyFitJones. And don't forget to LIKE our Facebook pages! Thanks!
View all posts by Rumpy's Kitty Siblings »
« Rumpy Went to the Vet Today
A Fond Farewell from Rumpy »