I am now assigned to work from home.

It’s great to get to be here with Rumpy and the kitties more, even if I’m working.

Rumpy has taken a turn for the worse. He still eats well and never says no when I offer to take him outside, but his breathing continues to become more labored. He had a spell last night and I considered a trip to an emergency vet. I cranked up the window a/c in the bedroom (that I installed for Rumpy to be comfortable without freezing the rest of us out) and he started breathing better.

This morning Rumpy ate his breakfast of chicken and kibble. He was ready to head outside. He snuck and ate some cat food. Same old Rumpy behavior. 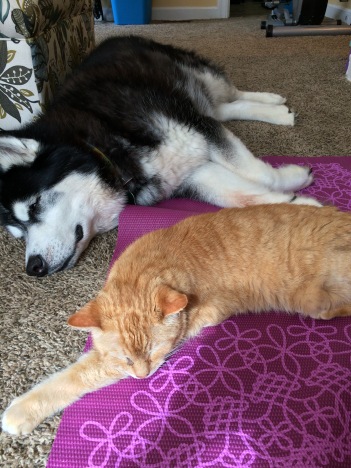 It’s hard to know what to do. On the one hand, I don’t want Rumpy to suffer greatly, and difficulty breathing can be frightening. On the other hand, he’s eating and walking around, and can still pull me around the yard when he puts his mind to it.

I often second-guess myself. Should I ask for yet another x-ray to see if the spot has grown more? Should I go ahead and consent to the surgery to tack his laryngeal flap? Should I get another opinion? I mean, I could get a different answer.

When I took Bubba to the vet 6 months ago and had bloodwork done, I was told then he was in the beginning stages of kidney failure and that while he shows signs of hypothyroidism, the medication could make his kidneys worse so it was up to me as to whether or not I gave him meds. Last week I took Bubba back for a follow-up and was told his kidneys were fine and his thyroid was worse. Same vet clinic. Same tests. Different vet. So now he’s on thyroid meds.

I’m continually weighing the options. Since our vet in Florida also thought Rumpy suffered from laryngeal paralysis, and two vets compared the x-rays, I’m not inclined to see another vet just yet.

Finances are one of those options I have to weigh. 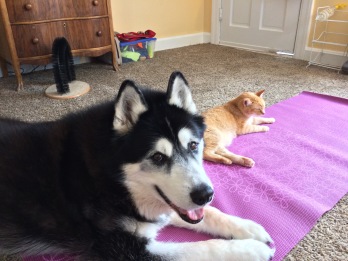 I never cease to be amazed with those who have the resources to pay for every procedure offered. Some have insurance, but insurance doesn’t cover all of it. Many people set up funding site accounts to raise money for vet care. That works for some, but Phoebe’s human never did raise enough money to repay the loan taken out to pay for her vet care in her final days. Funny, isn’t it? I see some people ask for money several times a year and rack up every time, while others ask for help and get none, or not all that they need. And no, I’m not asking for donations, so please don’t offer.

Enough whining. It’s time to start working, so let me get to it. The photos posted today are the most recent I’ve taken of the Rumpster. Enjoy, and have a good week.

Please keep Rumpy in your thoughts.

I'm Jen, caregiver to the late, great Rumpydog and now to some rather pesky kitties. You can follow us on Twitter - @FineMellowFella and @HissyFitJones. And don't forget to LIKE our Facebook pages! Thanks!
View all posts by Rumpy's Kitty Siblings »
« What is National Pet Day?
Rumpy Went to the Vet Today »

33 thoughts on “More From Rumpy”